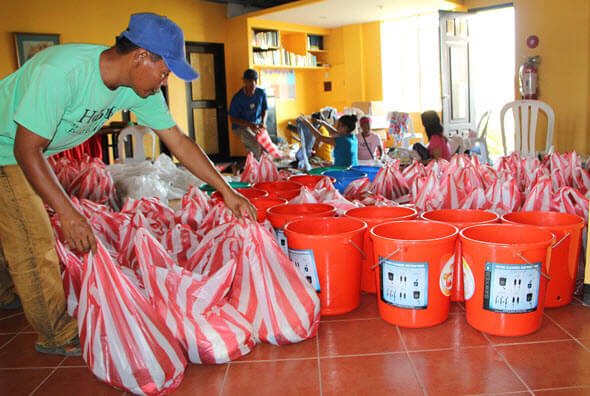 These families, mostly from barangay Malued where flood reaches four to six feet high, were transferred to the city stadium by the city government with the help of Philippine Navy and Police. They were evacuated three days after typhoon Lando (international name Koppu) affected the 80% of the 71 villages of Dagupan City.

One of the happy recipients of the relief said, “This is the first time we received this kind of relief goods, packed with five kilos of rice, milo, coffee, bread and canned goods.” According to Jho Urtula, a HOPE volunteer coordinator from Dagupan, “This is also our first experience to have this type of project”. Marnie Ignacio of City Social Welfare and Development Office (CSWDO) expressed that this is their first time to accommodate such crowd of evacuees in the City.

“This recent flood was caused by water unleashed from San Roque Dam, the largest water embankment in the Philippines. It is normal for us to be flooded. Sometimes you will be surprised to see water rising around the city during the heat of the sun.”, said Archie a HOPE volunteer in Pangasinan.

The team is composed of four staff and three volunteers who travelled an 8-hour drive on October 21, 2015 from Laguna to Dagupan City to prepare the relief operations scheduled on October 23.