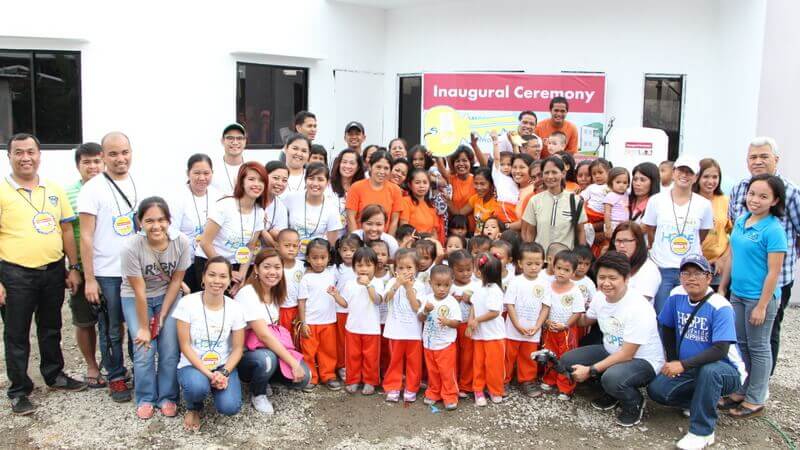 The lots where the centers are built were negotiated and procured on the first and second quarter of the year 2015. The building designs were finalized in the second quarter; and the construction of the buildings begun at the last week of August 2015. The grant we received from EMC’s global social responsibility initiatives funded the procurement of the three (3) parcels of land in three sites and the construction of the building structures on the ground floor of each center. The total cost of the project is 10 million Philippine pesos, raised through private and company donation in 2014 by EMC.

In Tacloban, the Center of HOPE was built in a 500-square-meter land in Barangay Cabalawan. The whole structure of the ground floor was completed, including all the perimeter walls, concrete flooring, roofing, exterior painting, sliding doors and windows. Water well was excavated and perimeter fence, concrete walls and columns were also built. The Center was constructed in the middle of the massive relocation sites of National Housing Authority, GMA Kapuso, and the Philippine National Police. The expected number of families to be relocated in the area may reach up to 5,000 families by the end of 2016 on which the Center would provide humanitarian services and community development projects.

In Daanbantayan Cebu, the Center was built on a 675-square-meter lot located in the poorest communities of Barangay Agujo. The ground floor of the building structure and perimeter walls, including doors, windows, roofing and exterior painting are all completed through the EMC Funds. Concrete slab in the second floor for future expansion of the building was also built and prepared. Water and electricity were installed. The landscaping works done by Daanbantayan ICOC church members added beauty to the static design of the center.

The three (3) Centers of HOPE ground floor areas feature a daycare center for underprivileged children, a big meeting room designed for accommodating different livelihood training and meetings, a computer and library room for education program, a kitchen for children’s feeding program, and a receiving area. The second floor with 232-square-meter size will be constructed in the future as an auditorium for big gatherings. Future plan includes income-generating programs, like venue rentals, to support the center operational costs.

The center will provide various humanitarian services, including education, health, protection, livelihood, disaster risk reduction and volunteer services, to support the long-term developmental projects in the communities being served.

To date, more than 200 local construction workers and their families benefited during the construction of the three (3) centers. Sixty four (64) families are provided with livelihood support and assistance and 152 children are helped through education and supplemental feeding. HOPE worldwide has also mobilized more than 500 volunteers in the three locations supporting and helping the ongoing programs and services of the organization.